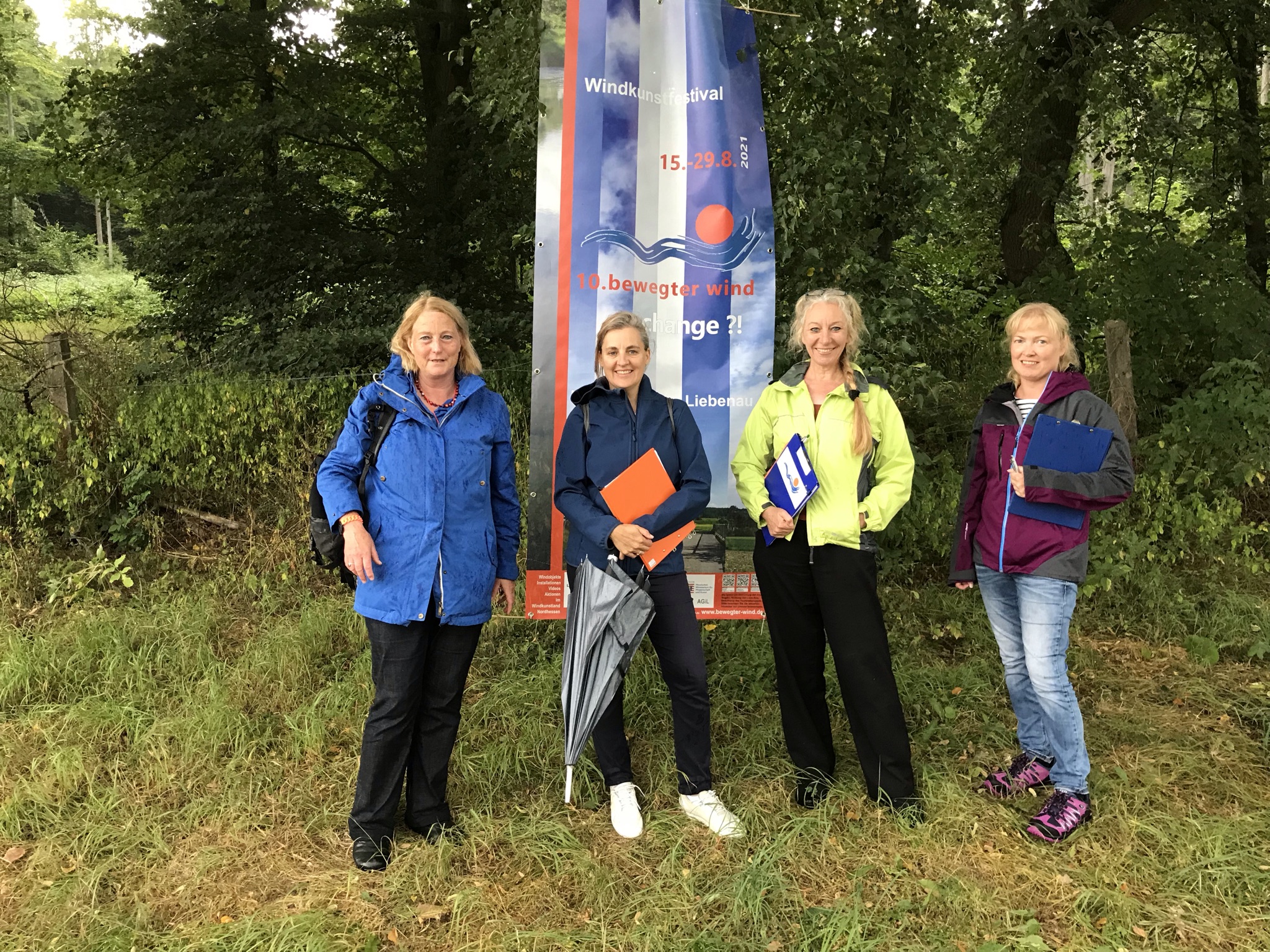 ow to make a selection, when all artists have already won by being juried into the 10th bewegter wind exhibition? The most important prize is certainly "to be seen" and to give voice to one's own view of the subject through one's work. This, it should be noted at this point, has been quite successful, because the number of visitors to the plein air art festival proves that the show has now made a name for itself.
The artistic positions testify to idiosyncratic perspectives, to surprising ideas, but also quite simply to craftsmanship. This not only provided us - the prize jury - with a basis for discussion, but also presented us with difficult decisions.
In a way, it was also a matter of "comparing apples with oranges", which, as we all know, is supposed to be almost impossible. So we had noted many good works on our slips of paper during the tour, all of which would have deserved a prize, and so we had to use parameters to make decisions.
One of these parameters for us was a good idea that plays with the theme of change?! but at the same time remains open enough to be able to change perspectives.

This became especially clear in the work "Moving Square" by Jürgen Heinz. Two congruent frames, which shift against each other by the slightest breeze, show a section of reality. One thinks. But they can also be two pictures and thus two realities. Like two transparencies showing the same thing. Original and clone. One begins to distrust one's perception ... What is convincing about this work, besides its openness to association, is the feeling of irritation it creates, combined with the astonishment at how quickly one's "world view" can waver. That the view through the frames forever changes the view of the landscape behind is quite an experience.

The video "Moving border" by Kuesti Fraun is similarly irritating. A small piece of barrier tape, as a symbol for a border, changes its appearance again and again, driven by the wind. What was just meandering, forms itself into something corporeal, disintegrates, overlaps, is trampled underfoot. What borders are there that are to be blown away just like that? Or is it the way of all borders in the course of time? Current political situations emerge before the mind's eye. The video conveys a feeling of powerlessness, of being at the mercy of others. memories of (self-inflicted) change, the effects of which one has lost control over long ago.
Christine Kruse comes from a totally different side with 2/ VAR 1/9, which shows us the change in a completely new way. With every step the viewer takes in front of the work, printed words overlap, transform into other terms. Change takes place "en passant." The idea of depicting change using language is not only extraordinary, but also just as vivid as language itself. Who has heard of "cyber arrest" or "social error"? The terms chosen by the artist are new and old in successful references. In its openness to combination, the work makes us want more. Involuntarily, one finds oneself thinking of one's own terms, having fun with them and being fascinated by the changeability of languages.

The work of Constanze Schüttoff "tabula rasa I in wandlungsfreiheit" evokes with simple means the complex process of pausing again and again to reconsider its path. The highly challenging character of the work is not exhausted in the shifting of the white paper panels. Playfully, one makes decisions and begins to think about the path one wants to take, about choice and possibility, about what one might influence with one's (spontaneous) decisions. As you walk through, you not only change the work, but you may be creating a different future based on your past choices.

Even from a distance, two boats resting on long legs - or are they stilts? -
aligned in the direction of flow of the Diemel. They could also be animals, creaturely objects that integrate themselves into the landscape as a matter of course and yet stand out from it. The figures remain enigmatic, cannot be classified, cannot be pigeonholed. Despite their size, they seem fragile and vulnerable, have something delicate and awkward. Something "out of joint" like the time we live in. The sculptures "Floating Alive" by Jiefu Zhou occupy the mind that comes to no solution. Are they boats or creatures, animals on stilts? And the braided rings hanging on the river, what do they have to do with it? In the mind it remains mobile. A good condition for change to happen.

Many other works would also have deserved a prize in our eyes. Especially to mention the cloud-like objects "For us all" by Geraldo Zamperoni, the work "Prayer" by Dina Hillebrand, which asks the right questions with a light idea and the work "Nine Names" by Markéta Váradiová, which convinced with its complexity.

If art manages not only to stimulate thinking, but also to trigger feelings, a lot has already been gained. Changes take place in the head, but only when the heart burns.