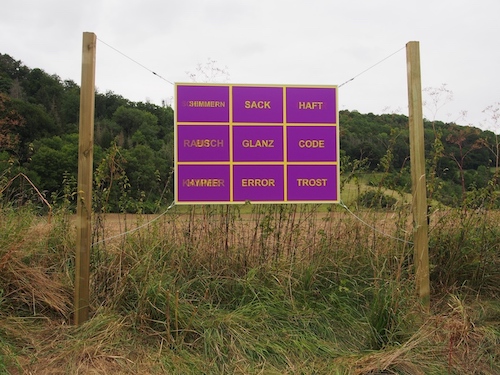 Christine Kruse comes from a completely different angle with 2/ VAR 1/9, which presents us with change in a completely new way. With every step the viewer takes in front of the work, printed words overlap, transform into other terms. Change takes place "en passant". The idea of depicting change by means of language is not only extraordinary, but also just as vivid as language itself. Who has heard of "cyberhaft" or "social error"? The terms chosen by the artist are both new and old in successful relationships. In its openness to combination, the work makes us want more. Involuntarily, one finds oneself thinking of one's own terms, having fun with them and being fascinated by the changeability of languages.

At once irritating and fascinating, Christine Kruse's object exhibited on the banks of the Diemel River appears at first glance to be a signboard. But with every step you take in front of it, the words printed on it overlap. In this way, the Hamburg artist represents change by means of language - and just as vividly as language itself: Words like "cyberhaft" or "social error" get caught in the mind and create references between the old and the new, which in their openness to combination encourage us to think further. Second place is endowed with 2,000 euros.