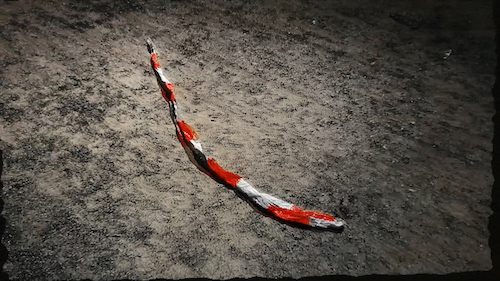 The video "Moving border" by Kuesti Fraun is irritating. A small piece of barrier tape, symbolising a border, changes its appearance again and again, driven by the wind. What was still snaking forms itself into something corporeal, disintegrates, overlaps, is trampled underfoot. What borders are there that are simply to be blown away? Or is it the way of all borders in the course of time? Current political situations appear before the mind's eye. The video conveys a feeling of powerlessness, of being at the mercy of others. Memories of (self-inflicted) change, the effects of which one has long since lost control over.

It is the seemingly insignificant but fascinating dance of a piece of barrier tape that has been torn loose: in his video, the Düsseldorf producer and filmmaker Kuesti Fraun tells of borders and their dissolution in a pictorial-sculptural way. The video shows a small piece of barrier tape - a symbol of a border - that is propelled by the wind and thus changes its appearance again and again. It snakes, takes shape, collapses and is trampled underfoot. The video conveys a feeling of powerlessness, but at the same time fascination. It is a piece of plastic waste that makes a political reference to the self-inflicted (climate) change over whose effects control has been lost. Second place is endowed with 2,000 euros.