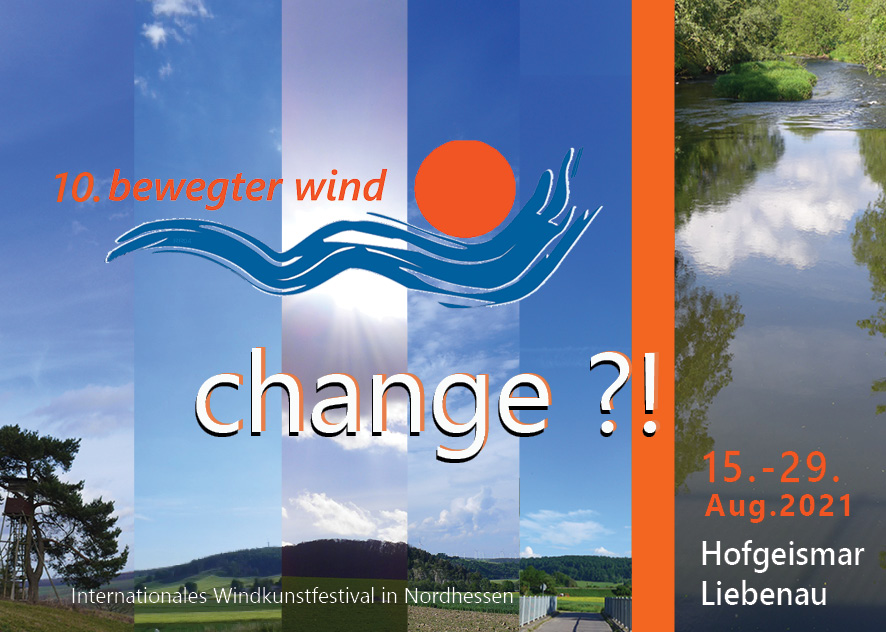 Art experiences on the mountain and in the river valley

After intensive planning and consideration, it is now certain: the popular wind art festival "bewegter wind" in North Hesse can take place! From August 15th to 29th, 2021, 58 artists from Germany and around the world will show their installations, videos and performances. This year's locations are Hofgeismar and Liebenau in the Reinhardswald Nature Park in northern Hesse. The moving wind is a free outdoor exhibition, accessible at any time, that captivates art connoisseurs and nature lovers alike.

"Especially in times of Corona, we are all looking forward to experiencing the fascinating combination of wind, art and landscape again," emphasizes curator Reta Reinl. "Due to the pandemic, we may have to make adjustments. This may affect the opening ceremony, fixed performance days and the awards ceremony to avoid larger crowds." Planning has been in full swing since the beginning of the year, with the situation constantly changing. Reta Reinl says: "It is also clear that this year fewer international artists will come to Northern Hesse than is usually the case with the moving wind. We are in constant exchange and are looking for new solutions, for example when it comes to housing and setting up the objects."

In the mood for change!

Artist Constanze Schüttoff from Radebeul also says, "I believe that people, our audience, are so hungry for artistic bright spots this summer that they will be open to anything new or improvised." The artist will be showing her work "tabula rasa | in wandlungsfreiheit" at the Moving Wind, which consists of sliding panels of fabric between trees through which visitors can pave their own special way. When artwork and landscape merge, she says, it's a process that takes place outside, where the wind blows.... And she adds: "There is also something positive in keeping one's distance, something that broadens one's view. So in every change there is also an opportunity - and that is exactly our common theme this year!"

Originally, the motto "Change?!" was aimed at climate change, i.e. the changes on our planet and the need to actively counteract them. In the wake of the pandemic, however, the term "Change" has also taken on new aspects: First and foremost, the irrepressible desire for change in everyday life, which was, and in some cases still is, influenced by lockdown and home offices.

Wind on the mountain, breeze on the river plain
There are two scenically outstanding exhibition locations that could hardly be more different and yet are close to each other: Hofgeismar and Liebenau in the Reinhardswald Nature Park. "Between Hofgeismar and Hümme lies our mountain resort," explains curator Reta Reinl. "The landscape is wave-like and reminds one of solidified ocean waves. You have a wonderful wide view. Up here is a mountain meadow bordering a  beech forest and an almost Japanese-looking pine forest - a hilly landscape that offers unique locations for our wind art objects!"

The second exhibition site is the river plain near Liebenau: here the Diemel makes its way through the valley. Steep cliffs on the river banks, small river islands and ancient willows create a lovely landscape atmosphere.

In 2020, Hofgeismar and Liebenau already successfully hosted the "Little Wind," an art event as part of the Kulturkoffer Hessen. Artists worked with children between the ages of 10 and 14 to create exciting wind art projects such as wind spirits, portrait kites and wind videos.

Helpers are wanted
At the moving wind 2021, 64 objects and installations by artists* from 18 countries are expected to be on display. "Traditionally, the moving wind starts with the set-up week one week before the opening, during which artists and helpers work together to install the artworks in the landscape," Reta Reinl tells us. "This year, volunteers are especially important, as some international artists are unable to travel due to the pandemic situation and therefore cannot set up their works themselves."

Sky mirrors and textile sculptures
For example, the Brazilian artist Geraldo Zamproni shows three huge puffed-up textile sculptures that remain in permanent, fascinating motion due to the wind. Kirsten Sauer was already a prize winner at the moving wind in 2016. She depicts the vulnerable atmosphere of our planet with a gossamer blue ribbon stretched between oxygen-providing trees. In contrast, Belgian artist Bram Lattré uses a large sky mirror to draw attention to the changing cloud formations.
Kordula Klose from Fürstenwald uses one-meter letters to place the word "Change" in the landscape in such a way that the level of meaning of "Chance" becomes visible.

When walking through the landscape, it is worthwhile to sharpen one's ears: Swiss artist Heinz Schmid, for example, has made metal rings up to one meter in size that pick up the breeze and turn it into sound. Katharina grote Lambers' wind harp will also enchant visitors with its gentle tones.

Among the expected three performances is the artist Andreas von Stosch, who will conduct radio interviews on the topic of change with visitors* and broadcast them. Among the video contributions is a work by Ria Gerth, which drastically demonstrates the pollution of the oceans by plastic waste.

Thanks to sponsors and supporters

Curator Reta Reinl extends her heartfelt thanks to numerous sponsors and supporters who contribute to the realization of the extraordinary Landart Festival: "I would especially like to thank the district of Kassel, the cities of Hofgeismar and Liebenau, as well as our sponsors this year. In addition, there are all the volunteers who actively support us in the construction, farmers who generously make their land available and residents who support us in the corona-compliant accommodation of the artists. We are very happy about that!"

Moving wind has already been around for 17 years

Actually, bewegter wind would have celebrated its 10th anniversary last year. In 2004, Reta Reinl had the idea to present international wind art at changing locations in Northern Hesse. She explains: "Art in a diverse landscape is a unique experience that appeals to all the senses.This creates impulses that make us rethink and think further. In times of Corona it is valuable to be able to meet in the fresh air, to engage in conversation and to immerse ourselves in a cultural environment.  Therefore, despite all the limitations, we are very happy that the 10th moving wind can take place!" On the occasion of the anniversary, she draws a positive conclusion and emphasizes in particular the close networking among the artists. At the same time, a unique closeness between artists and audience is created - especially through the joint week of construction.

In figures, a total of 629 works of art by 514 artists* from 35 countries have been exhibited so far at the moving wind - and this at 31 locations throughout North Hesse.